Recently I received my December issue of Popular Woodworking magazine.  While looking at it during lunch, one of my woodworking co-workers stopped to look at Glen Huey’s Line & Berry Chest of Drawers that graced the cover. 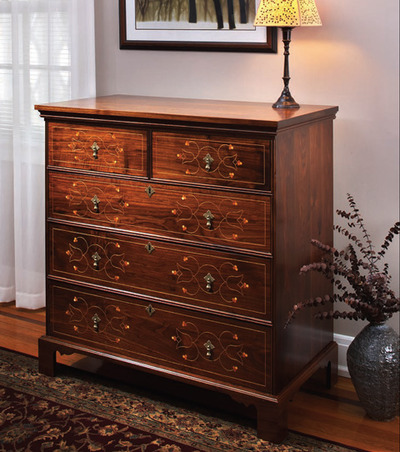 After thumbing through the article he smiled & said it must be nice!  Puzzled I took the bait & asked, “What do you mean?”

That sparked a discussion about why one should use/buy quality lumber & hardware on projects & then suddenly his point finally surfaced.  “Did you see the price of that hardware?” he blurted out.

However, I didn’t need to look because I had spoken to Glen while he was building the piece & knew that might be a sticking point to a lot of woodworkers.

But this got me thinking that there has to be another option that didn’t involve hardware being purchased at a big box store.  So I decided to contact Horton Brasses & had them send me their hardware so I could do a little comparison.

Once I received the package of hardware, I gave Glen a call.  I told him I wanted to do a comparison of both sets of hardware & asked if I could stop by the shop that Saturday to take a closer look at the hardware he used.

That Saturday, when I arrived at the shop, Glen was all smiles.  He suggested that we pull his hardware from one drawer & install what I brought so we can compare them side by side on the finished piece. 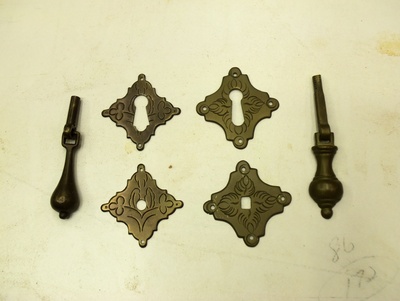 Well, the first thing we did was put both versions of the hardware down side by side.  (Horton Brasses hardware on the left, Ball & Ball on the right.)

The first thing I noticed off the bat was that the hardware used in the article looked beefier where the Horton Brasses hardware looked more dainty or delicate.

Next, we measured them.   I was surprised that the difference in thickness was only .01” So we started handling the hardware.  I noticed that the Horton hardware was stamped where the other was cast.

It was then that we noticed that the chasing on article hardware was done by hand.  It looked different from piece to piece.  However, the Horton’s chasing looked very uniform.

From here we installed the hardware on the top two drawers & stacked them for a better look. 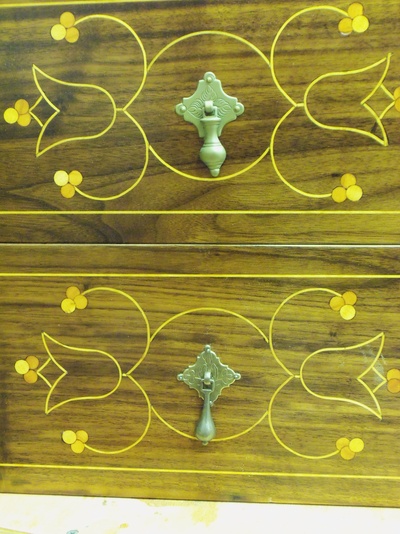 Photo shows Horton Brasses on the bottom <!– [if supportFields]><![endif]–>

My first thought after we took a step back to look was that the hardware used in the article made the piece look like it was made for a guy where the Horton Brasses hardware looked like the piece was commissioned for a woman.

The last part of this comparison came down to price.  Comparing the two we see the following.

Armed with the price difference of $177.62 & my crude but viewable photos to show a comparison, I went back in to work to show my troubled co-worker that not only was I able to find him an alternative hardware source that was attractive visually, but it would also fit his budget.

He was shocked at what I found & I broke into another discussion of how you don’t always have to use the same hardware & wood used in books & magazines, but that’s another article for another day…

Recently I was talking projects with a couple of my woodworking buddies.  One was working on a chest of drawers & was complaining about having to measure, mark & drill each pull for every drawer.  I kind of smiled & told him I have a simple solution shortcut for that.  Below is a step by step procedure on how I install drawer pulls on all of my projects.

After I have built & finished my project I get the smallest drawer & lay out the hardware I’ve selected.

Once I’m happy with the location of the escutcheons, I measure the location from one edge of the drawer to the center of the nearest hole for the pull & then measure the distance between holes on center.  My last dimension is the diameter of the hole itself. 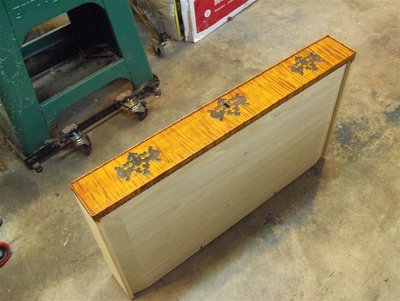 Armed with that, I grab a piece from the scrap pile & cut it to the height of the drawer.  I mark the top & side locations on the board & lay out the location of both holes.  (In this case the holes are located in the middle of the escutcheon.  This works the same if it it’s off center.)   From here I chuck the correct size bit in my drill press & drill the two lines. 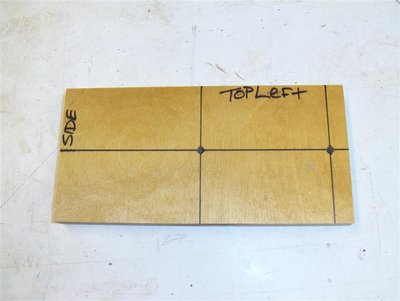 Once that is complete I flip the piece over & mark the top & side.  This becomes my drilling jig for this project.  From here I take the jig & clamp it to one side of the drawer & using the same bit from the drill press I drill my two holes for the post of the pull. 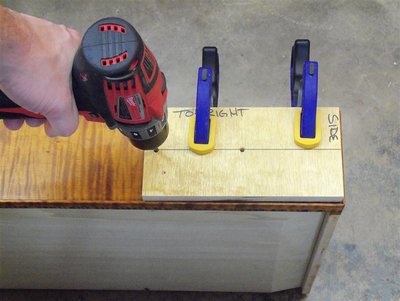 Once I’ve test fit my hardware I flip the jig over & clamp for the opposite side & drill.  Once this drawer is complete, I would do the same process on every remaining drawer.  The only measurement I need is to make sure the jig is centered (top to bottom) on the drawer. 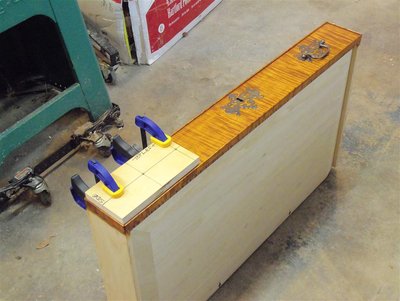 With all of the post pull holes drilled I chuck a ¾” forstner bit into my drill & create shallow counter sink cups on the back side of my drawer front.  This allows me to get my fingers & socket in to tighten the nut when the time comes. 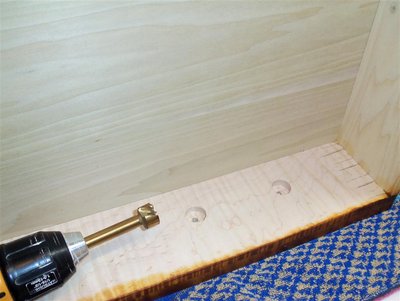 That’s it for the drilling.  Now I turn my attention to the drawer posts of the pull.  They come longer then I need them (which is better than being shorter) so I cut them to size.  Then, using my orbital sander I round the cut edges off.  This ensures the posts won’t snag on any clothes in the years to come. 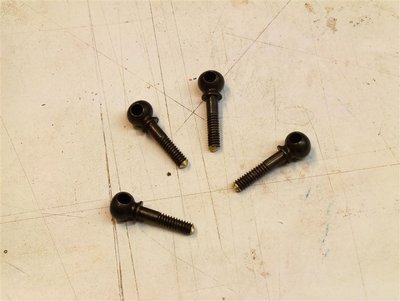 Once I have that complete I install the hardware & put the drawers to use. 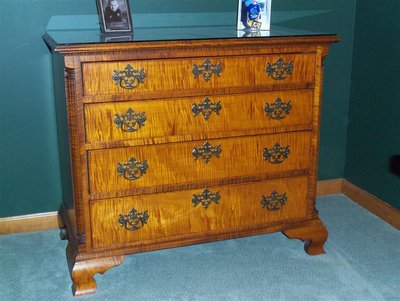 NOTE:  In this example I used the jig on beaded drawers.   I use this method on lipped drawers & even single pull drawers. 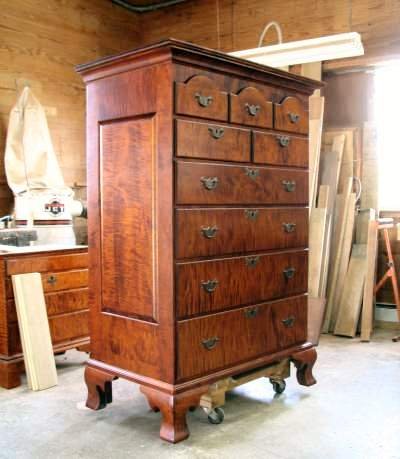 We have been back from our vacation for about a week now. Its good to be back at work, hopefully doing what we do best. After nearly two weeks off I was ready. Don’t get me wrong, time with the kids is great but I’ve got a job to do and I love it. I have been spending a little time on Charles Neil’s woodworking forum. Charles and his right hand woman, Sherri Miles, run a fantastic forum dedicated to woodworkers of all stripes. It is a great resource to anyone interested in woodworking and general banter-heck they even gave me a warm welcome.

Does anyone out there use any other wood forums? I am interested in checking them all out.